In memory of Sue Blom: Madrid on Wheels

My friend and fellow writer Suzanne Allés Blom died June 23rd in Milwaukee, Wisconsin, due to cancer. There were several friends present, who had been reading aloud a favorite book and discussing a topic of interest to her, politics, and her passage was peaceful.

In 2000, shortly after I moved to Spain, Sue came to visit, and she helped me write an article for the November 2000 issue of In Madrid, an English-language newspaper. 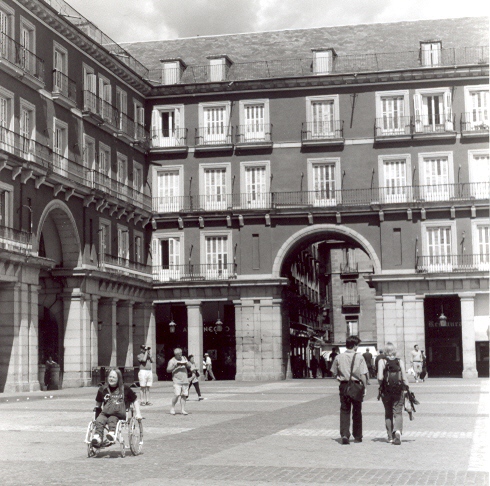 
Madrid on Wheels
story and photos by Sue Burke

My friend Suzanne thought the guards were going to carry her out of the Museo del Ejército. They headed toward the door, but then they turned, and, to her horror, cheerfully carried her in her wheelchair up the grand staircase to the second floor.

It’s a military pride thing, I guess. She had an obvious interest in historic weapons, and they weren’t going to let her roll away without seeing everything, even if her wheelchair didn’t fit in the museum’s elevator. They didn’t accidentally drop her, either. It’s a long fall down a flight of stairs.

Suzanne Allés Blom, a American friend, visited this summer. As soon as she mentioned a visit in an e-mail, I began studying Madrid for handicapped access. It didn’t look good: stairs everywhere. Two steep steps to get into my apartment building – maybe she could hoist herself up using crutches and a handrail, like the old ladies in my building. Someone would have to open the heavy door for her, though. She couldn’t come and go on her own.

She’d have to use crutches in the elevator, too. The door didn’t come close to the recommended width of 70 cm to let in a wheelchair. I could only pray to Santa Ascención, patron of lifts, that it wouldn’t break down for two full weeks, or she’d have to live in the lobby.

And what was there to do in Madrid on wheels for two full weeks? She cruised the web, I searched the bookstores and tourist offices. She found nothing. I found exactly one book, the Dorling Kindersley Eyewitness guide to Madrid. It listed wheelchair accessible sites, but added ominously, “Phone to check details. . . . On the whole, Spain is not wheelchair friendly.”

A staff member of the Confederación Coordinadora Estatal de Minusválidos Fisicos de España sat down with me and offered advice: the three big art museums are fine, the Palacio Real has an elevator, and the zoo and Parque de El Retiro are pleasant. He also recommended Atocha train station, with its impressive indoor garden and accessible restaurants and shops. I hadn’t thought of that, but it made sense, since I can roll heavy suitcases through it without trouble.

I mentioned that I don’t have a car. “That’s a real problem,” he said.

Only 40 subway stations have lifts, none in the center of the city. One out of three buses are “piso bajo” and in theory can accommodate wheelchairs, but have you ever seen someone in a wheelchair using them? Eurotaxis are taxis specially equipped to handle wheelchairs, but only 28 serve Madrid, so you have to call and wait, and perhaps pay a bit more.

But even if I drove, Madrid has only a few thousand handicapped parking spots and a half-million handicapped residents. City officials say that other drivers respect the spots, and disability activists say no.

This news did not surprise Suzanne. She travels a lot, and she’s philosophic. Every place she’s visited is a lot like home: inconvenient and sometimes impossible. She planned to bring her manual wheelchair. Self-propelled models are less tiring and better for hills, but they’re too heavy to pick up and won’t fit in the trunk of a car. They can’t be tipped easily to climb a curb or step.

Of course, taxis in Madrid are small compared to American cars. The manual wheelchair might not fit in a taxi trunk. Another worry: wheelchairs are handled like luggage by airlines, and sometimes they get mangled. She duct-taped the fragile parts together and packed a suitcase.

Would she like Madrid? I like Madrid. I like showing it off. I wanted her to have a good time, maybe a better time than at home. Spain had to be different somehow.

I was ready and waiting at Barajas Airport. And waiting. . . . Other than delays, Barajas was fine, with level floors and wide doorways and an eager although inexperienced attendant assigned to see her through the crowds safely. (Charles de Gaulle Airport in Paris, where she changed planes, was disorganized and ill-equipped, but that’s a problem for the French, who were also rude.)

We caught a cab. Her wheelchair, which had arrived intact, barely fit in the trunk. We arrived at my apartment building. She hoisted herself up the two front steps. The elevator worked. We planned our assault on the city.

She’s a novelist, and she needed to do a little research on 16th century weapons used in the conquest of the Incas. The Museo Naval was inaccessible. The Museo del Ejército was accessible, more or less, and offered an outstanding display of falconete cannons. The Museo de America couldn’t be better. But how to get there?

“We’ll just go to the corner and hail a taxi,” I said.

When she got a look at traffic and saw all the taxis, her eyes got wide. True, sometimes the trunks were too small, and taxis aren’t cheap – we tipped generously, since we weren’t fast and easy passengers. The reactions of the drivers fascinated her. Some were glad to be of service. Others muttered things.

In fact, people in general fascinate Suzanne, and El Retiro was a splendid place for people-watching, especially the wide Paseo Salón de Estanque. She learned how to tip buskers and liked it. She liked the terazza cafés even more. And if some paths were blocked stairways, well, that’s life. She’s used to it.

She showed me how to handle a small bump like an imperfectly installed cut in a curb. She got rolling fast and, at the right moment, braked just enough to make the front wheels jump a couple of centimeters.

Where there were no curb cuts, she needed a boost. Boosting takes practice, though. Wheelchairs can tip. Some have seat belts.

Plaza Mayor was better than I had hoped. The pavement was rough (did you know that some wheelchairs have shock absorbers?), but level. She could roll right up to the cafés. Many shops had only a small step at the entrance, and she could buy souvenirs for the folks back home. There were plenty of people to watch.

She enjoyed roaming around Madrid de los Asturias and admiring the old architecture, even though the sidewalks were narrow and often blocked by trees, posts, trash bins, steps, construction, hills, and parked cars. When we had to resort to rolling down the middle of street, drivers waited for us. That surprised her.

The Palacio Real charged less for handicapped visitors, and we got to see more: a series of long corridors and metal ramps that took us to a fairy-tale elevator, with etched glass windows and red velvet curtains. It was just barely big enough for a wheelchair, but regal.

The Palacio’s beautiful new Real Armería, however, had two steps in front and more inside. I asked a guard if there was a handicapped entrance.

“No. But she has a right to see it. You should complain.”

I was more impressed by the can-do military might of the Museo de Ejército.

The Museo de Archeológico Nacional was accessible in the usual fashion – down a long side path and through a maintenance door. We were admiring neolithic baskets when we realized no one had remembered to charge us admission. Of course, the Altamira cave replica was impossible.

The big art museums – Prado, Reina Sofía, Thyssen – were fine. The whole world can see “Guernica.” Atocha’s garden pool had big turtles and tiny tropical fish. Sidewalks along the Art Walk were level, so we could admire Cibeles and Neptune, and stop for a granizada at a café.

We had to hunt for accessible bathrooms, and I forgot something important. Many bathroom lights here have timers. She can take care of herself, but she moves slowly, too slow. “I know where everything is, so it was okay,” she said when she came out, laughing, but I don’t think she was truly amused.

Finally, after two weeks of art, parks, history and general beauty, what would she want to do to say goodbye to Madrid? She wanted to spend an evening at Plaza Mayor. As we headed up Calle de Postas, I saw why. In the plaza, she was independent, with space to roll, lots to see, people to watch, stores she could enter, and her choice of cafés.

It was a cool, busy summer night. Strolling musicians entertained us. Waiters in white jackets brought us overpriced wine. She looked around, smiling.

“You know,” she said, “Madrid looks so Spanish. It’s not like Germany, where all the buildings are modern and generic.”

“But modern is more accessible.”

I couldn’t argue with that. She’s the one who was inconvenienced.

“I don’t have to call ahead to get access, either,” she said. “Here, they’ll do things for you right away.”

“They value spontaneity here,” I said.

“And people on the street don’t treat me the same. They look at me more, especially little kids. In the United States, everyone pretends they don’t notice you. In Madrid, they walk a lot closer to my wheelchair and stand right next to it. They don’t avoid me. It’s like they know, but they don’t care.”

“Spain is indifferent,” I said.

That’s what I wanted to hear.