They’re running with the bulls in Pamplona again 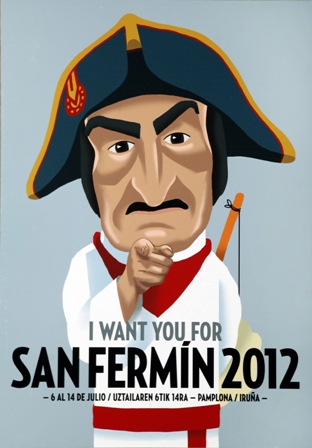 The San Fermín fiesta has begun in Pamplona, Spain, and its most famous activity, the running of the bulls — encierro in Spanish. Every day at 8 a.m starting today and continuing to July 14, bulls will run through downtown from pens to the bullring, and thousands of people will run with them.

Today’s run featured bulls from the Dolores Aguirre ranch. It took them 2 minutes 53 seconds to cover the distance, and for the most part the bulls were “noble” and took little notice of the crowds. However, one man, age 73, was gored in the leg shortly after the bulls left the pen, and at the end, a bull’s horn caught a man’s collar and kerchief (red kerchiefs are traditional at the fiesta) and he was dragged down the street into the bullring. He suffered only a few bruises.

Note that there are six bulls accompanied by six steers, which are tan-colored, larger, and wear bells. The steers know the route and make sure the bulls don’t get lost or frightened.

The goal of a runner (as opposed to los valientes, the “valiant” participants who stand off to the side and avoid the bulls as much as possible) is to run directly in front of the horns. The massive number of runners on weekends makes this more difficult, and several runners were injured in falls as a result of the crowds.

Of course, the fiesta includes a lot more activities. The official poster (above) depicts one of the “big heads,” specifically a character that roams through the streets and chases people, especially children, to their delight. The fiesta also offers music, dancing, religious processions for Saint Fermín, and fireworks.

You can follow the Sanfermines at the website of Radio Television Española, which has covered the fiesta since 1982. A staff of 70 people and 30 cameras are hard at work. Scroll all the way down on the page and you can watch the encierro from different cameras along the route:
http://www.rtve.es/noticias/san-fermin/

Why run with the bulls? Though he was speaking about something else, Robert A. Heinlein explained it concisely: “Nothing gives you more zest than running for your life.”