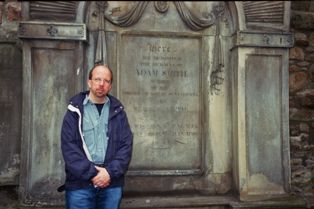 If you haven’t read Adam Smith, you probably think he supports free-for-all capitalism and is thoroughly pro-business; governments should be small and do little.

If you have read his most important book, The Wealth of Nations, you know that isn’t true. He considered the people who run businesses often to be fools and cheats, and believed that government ought to do many specific things, such as provide public welfare for the unemployed and run certain public projects rather than privatize them, because privatization would lead to cheating and ruination.

I took this photo of my husband at Smith's burial place in Canongate Kirkyard in Edinburgh, Scotland. Note the coins left in tribute on the headstone — small copper coins from all over the world. Smith’s fans are, appropriately, thrifty.

In honor of the anniversary of his death, here are some excerpts from The Wealth of Nations that may be good advice for our times:

“The interest of the dealers, however, in any particular branch of trade or manufactures, is always in some respects different from, and even opposite to, that of the public. To widen the market and to narrow the competition, is always the interest of the dealers.... The proposal of any new law or regulation of commerce which comes from this order, ought always to be listened to with great precaution, and ought never to be adopted till after having been long and carefully examined, not only with the most scrupulous, but with the most suspicious attention. It comes from an order of men, whose interest is never exactly the same with that of the public, who have generally an interest to deceive and even to oppress the public, and who accordingly have, upon many occasions, both deceived and oppressed it.”
Book I, Chapter XI, Part III, Conclusion of the Chapter

“All for ourselves, and nothing for other people, seems, in every age of the world, to have been the vile maxim of the masters of mankind.”
Book III, Chapter IV

“Though the principles of the banking trade may appear somewhat abstruse, the practice is capable of being reduced to strict rules. To depart upon any occasion from these rules, in consequence of some flattering speculation of extraordinary gain, is almost always extremely dangerous, and frequently fatal to the banking company which attempts it.”
Book V, Chapter I, Part III