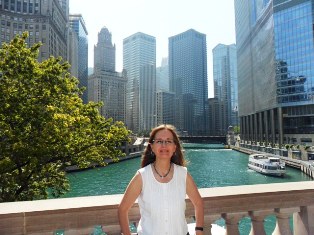 I don’t get back to the United States every year, so when I do, I find surprises. This year, I spent August 24 to September 8 in Milwaukee, Wisconsin, visiting family and friends, and Chicago, Illinois, attending Chicon 7, the 70th World Science Fiction Convention. Here are some observations:

American steakhouses are a true culinary treasure and should be celebrated. Although Spain has great pork and seafood, its beef is tender but bland. That’s because in Spain, the animals are slaughtered a year younger than in the US, so their flavor is less developed. I yearned for some good American beef. And oh my God, is it good.

Speaking of food, I observed in several supermarkets that home cooking seems to be on the wane. I could have bought ready-made anything. Although there does seem to be an increased interest in cake decorating.

I know this may be hard to believe, but clerks and waiters exceed their European counterparts in service and amiability. Some of them even seemed to be enjoying their work. Maybe they weren’t, but they put on a convincing act.

Television commercials have not improved.

Politics in the US actually may not be more nasty than politics in many European countries, but television ads, which are far more numerous in the US, make the nastiness harder to ignore.

Milwaukee and Chicago are pretty — even beautiful — in ways rarely seen on television and movies, which is the chief way foreigners learn about the US.

The science fiction convention was a blast, but too big. With more than 5,000 people attending, almost everyone was there, but I couldn’t find many of the friends I had hoped to meet there.

In the US, seems to be no other setting for air conditioning other than “arctic wasteland.”