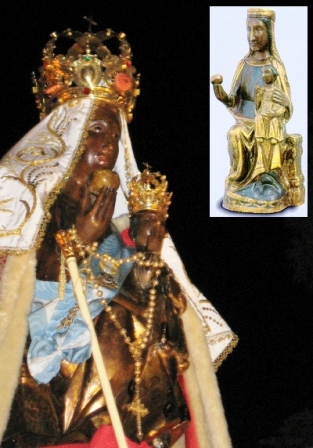 Every local Virgin has her legends and miracles, and this is just one of Atocha's:

He gathered some men and construction began (at more or less the site of the current basilica), but as it neared completion, the Moors suspected that he was building a fort and amassed to attack. They badly outnumbered the Christians, and despite his prayers, Gracián feared defeat. To prevent his wife and two daughters from falling into the hands of the Moors, he brought them to the altar, drew his sword, and chopped off their heads. He left their corpses in the chapel and went out to fight to his death.

But at that moment, great flashes of lightning and deafening thunder blinded the Moors and terrified them. They trampled each other as they tried to run away, giving the Christians an easy victory. After the battle, they hurried back to the chapel to give their thanks. But when they arrived, Garcián discovered his wife and daughters on their knees praying before the altar — alive and well, but with a red line around their neck where he had severed their heads to remind him of his lack of faith.

(Astute readers will see a few historical problems with this story. Well, yes, such as the fact that the town of Madrid did not exist, and it so it had no mayor. It's a traditional story, and "tradition" in Spain means that you should take it for its dramatic, folkloric, or didactic value, not as fact.)

But over the centuries, the statue, with its gentle, happy eyes, was always protected and saved.

I hope to be there. I'm not Catholic, but Atocha is my neighborhood, and she's been here a lot longer than anyone.