Time zones yawn wide. Florida is six hours behind Madrid, so the election night party in Madrid started when the party in Florida would have ended if Florida knew how to count votes — that is, a little before midnight on November 6, 2012.

Four years ago, Democrats Abroad Madrid, the local chapter of the overseas branch of the Democratic Party, had organized an election night party at the Circulo de Bellas Artes, a big, venerable cultural center. This year we went for Sala Galileo Galilei, an old theater recreated as a popular live music venue.

The 2008 election had generated extraordinary enthusiasm. In Spain, the vote had been simplified to one question: Would the United States, with its racist past, elect a black man as president? Americans and Spaniards wanted to witness history, so although we had hoped for 2,000 people at the party, more than twice that number wanted to attend. And the night had been magic.

Now, the stakes seemed less historic, although American passions ran high among both long-term residents and students who had come to study abroad. Economic troubles in Spain and the US meant that Spaniards were following the election with a more personal interest this time, since a strong US economy could help pull Spain from its recession. Romney tended to remind them of Merkel.

This year, we chose a more modest site for the party, which turned out to be ideal for a party of 500. At 11:30 p.m. a volunteer crew arrived for tasks like decorating and setting up food sales. I was helping with the media. We expected about 40 journalists, and some were already waiting for me, looking for people to interview and hoping they could circulate freely through the crowd. “Of course,” I said. “Make yourself at home and talk to anyone you want.” They did, to the entertainment of party-goers.

Journalists found plenty of local color in the people wearing campaign tee-shirts and hats. One man even wore an Obama campaign tie. A volunteer painted faces. I led a cameraman to one woman who had come with tiny flags painted on her nails, and she was happy to display them. Best of all, we had life-sized cardboard cutout of President Obama so we could pose for photos with it. One television reporter did her standup with her arm around its shoulders.

Mostly, we waited. And waited, watching CNN projected on a screen on the stage. At 1:10 a.m., Florida was reported to be leaning Obama, and we screamed even though the vote tallies were coming in slowly. An hour later, I was getting the Obama sunrise logo painted on my cheek, but we paused when singer Liza Tredway took the stage to lead us in the national anthem.

Then it was back to waiting, watching CNN’s dogged reporting, cheering or booing results and projections until we were hoarse, checking the Internet for news, sharing gossip and nervousness, buying a snack and a drink, and waiting...

At 4 a.m., the news looked very good, but too many states — especially Florida, whose count in key areas was far from certain — were still too close to call. At 5:15, we knew the final outcome was near. The cardboard Obama moved across the room to witness the results more closely.

Then, at 5:20, CNN called the election. We cheered, we hugged, we kissed. Cardboard Obama went bodysurfing through the crowd.

Only one thing remained: the victory speech. The crowd thinned. Someone had apparently kidnaped Cardboard Obama because it couldn't be found. But we kept waiting to see the final act of this long night. 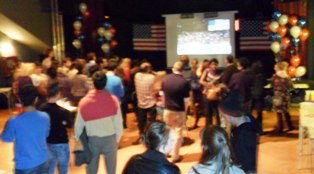 It didn’t come. Romney wouldn’t concede, even though Fox News had declared Obama the winner. Finally, the hall had to close. A friend and I shared a cab home in the cold, dark morning, and when I got to bed at 6:40, Romney still hadn’t conceded.

This had been a heated election, but Obama wasn’t as historic as he had been in 2008. Instead, he was a sitting president with a record of successes and disappointments seeking re-election. The magic had dissipated, but another process had begun that would be analyzed and overanalyzed for days and weeks to come. His victory would change America. I knew I could see his speech on the Internet when I woke up. And maybe Florida’s votes would have been counted, too. (No, they weren’t.)