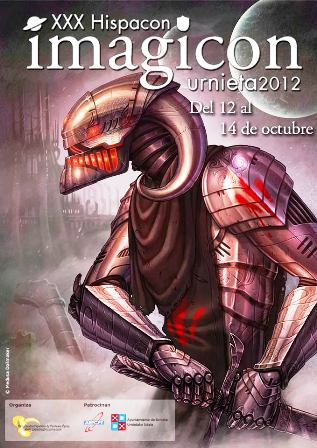 I’ve attended science fiction conventions in the US and in Spain, including this year’s Worldcon in Chicago at the end of summer and Hispacon in Urnieta in mid-October. In some ways, conventions in both countries are alike, which isn’t surprising. Although Spain has its own literary trajectory, many of the traditions and habits of American and British fandom have been imported into Spanish fandom, such as genre categories, awards, and the whole idea of conventions themselves.

In fact, Spanish fans (and fans in most of the rest of the world) will know all about Isaac Asimov or China Miéville, although US fans are unlikely to know about Domingo Santos or Javier Negrete — translations flow mostly one way, sadly.

At a Spanish convention, much like a US or British convention, you will find an active interest in books, magazines, television, movies, and Internet publications, activities, and entertainment. Costumes, including steampunk garb, are becoming more popular. Role playing games caught on a while ago. More and more often, convention attendees wear tee-shirts with genre slogans and art, but Hawaiian shirts have yet to make a splash.

Spanish authors and fans mix with the same equality as in the US or Britain, and for the same reason: authors are fans. You’ll find panels and workshops of authors and fans expounding on topics more or less related to the genre and happy to interact with the audience to the enrichment of all.

But you’ll find a few cultural differences that are very Spanish.

Actually, this is a general Spanish thing. Friends greet and say goodbye with air kisses on both cheeks: men and women, women and women. Since Spaniards are in general good-looking, this is fun in itself. But imagine the squee of kissing your favorite author!

New books are presented to fans and likely readers in sessions at conventions (and at bookstores and events at other times of the year), although not quite the same way. In the US, the author might make a few remarks and then read from the new book. In Spain, a panel of people possibly including the author will expound on the book, and the book will be shown off with all its glorious cover art, but it won’t be read aloud. I don’t know why. It’s just not done — not frowned upon when done in other countries, but not done in Spain.

Unlike than in the US or Britain, awards are often presented for unpublished works. This is an old tradition especially common outside the genre, and, really, the award acts as publicity for the soon-to-be-published work. At a Hispacon, the big awards, like the Ignotus (which is the Spanish equivalent of the Hugo) are for published works, but you might encounter an award or two for something not yet in print. This is why.

Somehow, every convention manages to have a bar on premises or at least nearby. A Spanish bar serves everything from liquor to coffee along with snacks, so you can be in the bar at any time from morning to night. You’ll probably be there sooner or later, even if you’re a tea-totaler.

Spain has a wine-based cuisine. No dinner is complete without wine. So at a gala awards dinner, expect to get all the wine you can drink. In addition, or as a consequence, expect the dinner to be loud and jovial.

Don’t expect room parties at the hotel. This just isn’t the custom. Spaniards rarely invite non-family members to their homes for entertainment, so to the extent that a hotel room is a home away from home, it’s not the place for entertaining people. Instead, friends meet in bars for a night out, both in daily life and at conventions. Since Spanish bars are so plentiful and varied, the lack of room parties creates no problem at conventions. You can go to bed early at a Worldcon or a Hispacon, but you don’t have to. Why would you even want to?

So a Hispacon will be different from a Worldcon, but just as at a Worldcon, you can have all the fun you can handle, learn about new books, discuss shows and films, make friends, and meet (and maybe kiss) your favorite authors. Best and most important of all, you can spend a weekend engaged in fierce public love of literature. Fans are like that the world over.