(If you’re on our Christmas card list, you’ve already received this.)

This sculpture of the Three Kings is on the side of a building in our neighborhood.

We've had a quiet year, even though political and economic events here in Spain and back in the United States were noisy and intrusive.

We joined my husband Jerry's brother Tom and his wife Mary for delightful and scenic long weekend in June. They were in San Sebastián-Donostia on the northern Atlantic coast of Spain as part of their European tour.

We also visited Milwaukee at the end of August and early September to see family and friends, and took a side trip to Chicago for the World Science Fiction Convention. I also attended Spain's 2012 science fiction convention near San Sebastián in October. 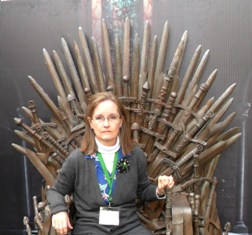 The Iron Throne made a special guest appearance at Spain’s convention.

For yet another year, my first novel debut has been moved back, now to fall of 2013, due to a weak economy. The book is tentatively titled Pax: a Novel. Stay tuned.

I’m still teaching English to Spanish teenagers, and has participated in several translation projects, including the ongoing translation of the Spanish medieval novel Amadis of Gaul. You can read it at http://amadisofgaul.blogspot.com.

Jerry is still working in IBM sales, and traveled this year to Munich, Belgrade, Milan, Dubai, Amsterdam, Geneva, and Brussels.

Best wishes for the holidays and for 2013!