Little stone cylinders that looked like screw threads: those were my first fossils. By early grade school I knew what fossils were — and what excitement to find a real one! They were common in the local white rock that I eventually learned was limestone, and they could be most easily found in fresh gravel. My little friends and I would eagerly pick through dusty new gravel looking for our very own fossils.

These screw-like things had served as a stalk for some sort of — something called a “crinoid” that had lived in the sea. Sometimes I could find loose individual plates of the stalk: these stalks looked like screws because they were made of many round flat pieces. Occasionally, I could find a bit of the flower-like thing at the top of the stalk, although the best place to see that was in museums. Museums had even better fossils, though, especially trilobites. I lusted for a trilobite and did not dare to dream of having my own dinosaur fossil, but I happily settled for crinoid stems.

Humble though they were, crinoids still resembled nothing in my environment. They looked like flowers on long stalks, but they were animals, wondrously strange. They proved that another kind of Earth had existed, and that fact opened so many possibilities. The past had been different, the future would be different, too, and the present itself was unimaginably big for a grade-school girl in Milwaukee, Wisconsin. Those little round fossils made my childhood world enormous. 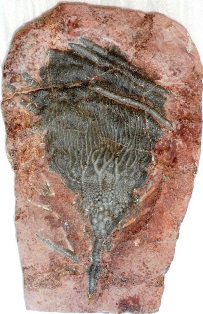 My husband got me this crinoid fossil. He could not have guessed what it meant to me.

The specific fossil is a fine example of a species called Scyphocrinites elegans that lived in the late Silurian to the early Devonian. At that time, primitive plants had carpeted the mega-continents, Gondwana and Euramerica, providing homes to primitive arthropods. The shallow, wide oceans were filled with fish, shellfish, reefs, and trilobites.

The sea also held an abundance of crinoids, a species related to starfish, sand dollars, and sea urchins. A few crinoids still live in the oceans, but so deep that we rarely see them. They spread their arms out like the petals of a flower to filter plankton from the water. Some are anchored in place, and some can “walk” with their root-like feet or drag themselves with their arms.

But the Scyphocrinites was different. It grew a “lobolith” or floating sphere that allowed it to hang upside down and drift with the currents. Star-shaped plates covered its beautiful calyx, the flower-like head. Because it could travel, it spread wide across the Earth.

This particular fossil came from the Sahara Dessert — how the world has changed over the eons! — specifically from the Errachidia Province of Morocco.

I can display it as a thing of beauty, but every time I look at it, I remember how excited I felt as a little girl to find proof of how big and astounding the world was. As the years have gone by, the world has grown even bigger and better.