I went to Kiev, Ukraine, for the 2006 Eurocon, the 28th European Science Fiction Convention. I had a little time to see the city, which is lovely and elegant, and to take this photo: 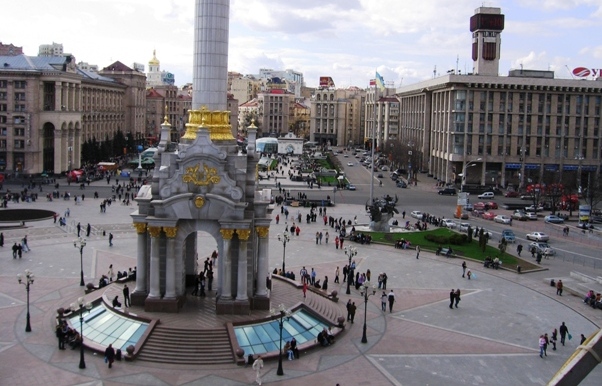 Independence Square (Maidan Nezalezhnosti) got its name in 1991 when Ukraine became independent from the USSR, but it has existed since 1869, and it has had many names and designs. At the center of the photo is the gilt base for a tall pillar topped with a statue of the goddess Berehynia, placed there after the most recent remodeling in 2001.

Over the years, the square has been the site of many political rallies, such as the Orange Revolution in 2004 and, starting in November 2013, Euromaidan. Here is a photo from the Washington Post from February 20: 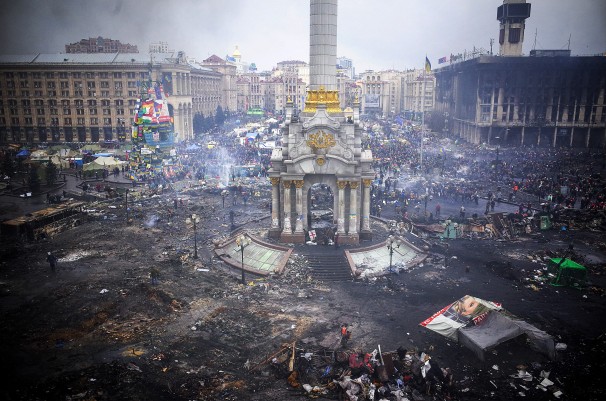 A few days in Kiev hardly makes me an expert, but I can tell you one thing: the area in which the protests took place is small, just that downtown square and a couple of blocks of the surrounding streets. It hurt to see the flames and blood.

And I know enough about the issues behind the protest to understand that they include not just the future of Ukraine but the future of Russia and Putin, and the European Union. Or Russia vs. the European Union. José Ignacio Torreblanca, a columnist for El País newspaper in Spain, has even suggested that the conflicts in Syria and Ukraine are part of a cold war between Russia and the EU.

These are tough times for democracy.