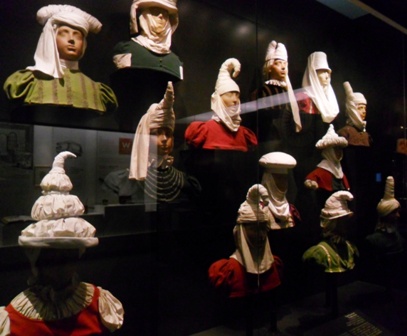 An explanation: Last weekend my husband and I went for a brief vacation in San Sebastián/Donostia. That’s a town in Spain in Basque Country on the northern Atlantic Coast near the boarder with France.

While there, we visited the San Telmo Museum, housed in a former Dominican monastery. It contained art and historical and cultural items from Roman times to the present. The section on Basque culture included this display of a recreation of headdresses, which was described this way:

“Basque headdresses, cotton and silk, hand sown. 20th century reproductions. The fabric headdresses worn by married women and widows indicated their marital state, locality, and economic status. But it was their supposed phallic symbolism that caused ecclesiastical authorities to ban them in the early 17th century.”

Married women wore the headdresses with the supposed phallic symbols and widows wore the plain ones.