What is Spain’s science fiction like: its themes, its scope, its authors? That’s a big question, and for a fast answer, we can look at the novels that have won the Ignotus Award over the last decade.

The Ignotus Awards are presented by the Spanish Association of Fantasy, Science Fiction, and Horror at the annual national convention, Hispacon. In many ways, they resemble the Hugo Awards presented at Worldcon; the Ignotus recogizes works in many categories, including novels, short stories, magazines, poems, artwork, and websites. 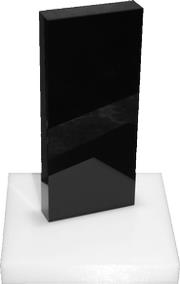 The Ignotus Award is a black marble monolith. It shares the Hugo’s strengths and weaknesses: relatively few people vote (starting this year, the voting base has been dramatically expanded), but those voters are intensely engaged, so while the choice of winners might generate controversy, no one can argue that they don’t rank among the year’s best.

2012: Fieramente humano [Fiercely Human] by Rodolfo Martínez. This complex urban fantasy returns to a city that has appeared in other novels, and it is a character in itself. An assassin arrives in the city to settle a thirty-year-old debt with Doctor Zanzaborna, a sorcerer, and police officer Gabriel Márquez learns that he was involved in supernatural events in his past without his knowledge.

2011: Crónicas del Multiverso [Chronicles of the Multiverse] by Victor Conde. Part of the Multiverse saga. The Variety is a small universe surrounded by a cosmic void and filled with a different life forms and civilizations. A space pirate steals an object from the Urtianos that is so valuable that they will go to war against all other intelligent species to recover it. The Urtianos also know that their universe is about to die.

2010: Última noche de Hipatia [The Last Night of Hypatia] by Eduardo Vaquerizo. A tragic love story framed by the city of Alexandria. A new disciple arrives from a far-off land, and Hypatia suspects he has a secret. In fact, he is from the future and knows that she will soon face a losing battle with fanaticism.

2009: Día de Perros [Dog Day] by David Jasso. Two teenagers spot a stray dog and decide to take it to its master and ask for a reward. In this novel about friendship and psychological suffering, their simple plan soon spirals down into suspense and horror.

2008: Alejandro Magno y las Águilas de Roma [Alexander the Great and the Eagles of Rome] by Javier Negrete. Alexander, the best military strategist in history, survives an attempted poisoning and decides to turn west and conquer Europe. To do that, he must defeat the incipient Roman Empire. Multiple points of view enrich this alternate history.

2007: Juglar [Jongleur] by Rafael Marín. In medieval Spain, the orphan Esteban survives in the rough world of the Spanish Reconquest by his wits, poetry, knavery, and magic. Torn between good and evil, he uses his skills to fill the post of troubadour for Rodrigo Díaz de Vivar, “El Cid.” When El Cid dies, Esteban’s black arts might help win a crucial battle.

2006: Danza de tinieblas [Dance in the Shadows] by Eduardo Vaquerizo. In this alternate history, the Spanish empire forged in the 16th and 17th centuries lasts until 1927, the year in which the book takes place. Schemers, dissolute nobles, and inquisitive monks populate Madrid, while a series of murders threaten to reveal a mystery that could bring down the empire. There is nothing Victorian about the novel’s steampunk setting.

2005: El sueño del rey rojo [The Red King’s Dream] by Rodolfo Martínez. Andrea finds a computer disk next to a dead man that contains the code to create an artificial intelligence. Alex recognizes the code as the one used to recreate his associate Lurquer as an artificial intelligence shortly before his suicide. Amid their personal rivalries, they discover that the dead man does not seem to have existed, but a worldwide conspiracy does.

2004: La espada de fuego [The Sword of Fire] by Javier Negrete. This epic fantasy, part of a trilogy, centers on Zemal, a legendary sword of fire and symbol of power that every warrior aspires to possess. Seven aspirants fight for it in a battle that eventually threatens to break the peace between gods and men. Warriors and sorcerers must unite to defeat chaos and destruction.

2003: Cinco días antes [Five Days Earlier] by Carlos F. Castrosín. In the near future, a police officer recovering from injuries in a bomb blast is assigned to investigate the murder of an alderman in Supra Beni, a megalopolis suffering from rampant corruption. Supra Beni is a single giant building that developed from today’s Benidorm, a tourist city filled with skyscrapers on the Mediterranean coast near Valencia.