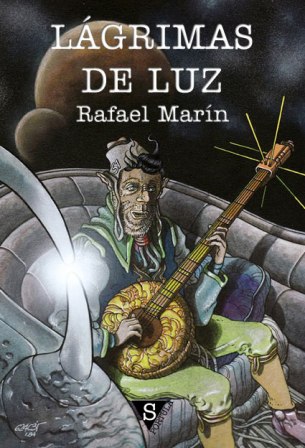 Lágrimas de luz [Tears of Light] by Rafael Marín is often called the “before and after” novel in Spanish science fiction. Published in 1984, and written a few years earlier when Marín was only 22 years old, it proved that a Spanish author could write an ambitious literary work of science fiction.

This might sound odd. Of course Spanish authors could – but they had to believe that themselves, and they had reason to doubt it. For the previous two centuries, realism and naturalism had reigned supreme in Spanish literature. Despite “futurist” authors like Nilo María Fabra, Spanish science fiction (and fantasy and horror) didn’t exist and wasn’t possible.

In the English-speaking world, science fiction set down its roots in the early 20th century, first as pulp and then as more serious works. Spain had its pulp too, starting from the 1950s, although its authors usually wrote under Anglo-Saxon pseudonyms like Louis G. Milk or George H. White at the behest of publishers, who did not think openly Spanish authors, pulp or serious, would sell. Top English-language authors like Alfred Bester and Roger Zelazny were available in translation, though, and they made their mark.

From 1968 to 1982, a fanzine with a professional attitude, Nueva Dimension, edited by Domingo Santos, provided budding authors with a chance to grow, and some solid works began to appear. But nothing caught readers’ attention like Lágrimas de luz.

During the Third Middle Ages, a young man named Hamlet Evans, living in a small town that manufactures food, aspires to more in life than toiling in a factory, numbed by drugs and sex. He wants to be a poet, specifically one of the bards whose songs celebrate the Corporation that expands the human empire and protects it from its enemies. He is accepted, trains at the bards’ monastery, and is assigned his first military ship.

Soon he learns that the glorious triumphs of the empire are anything but: indigenous life forms are cruelly wiped out and the planets’ resources are stripped as the Corporation expands its iron grasp. Disillusioned, Hamlet can no longer compose acceptable epic poems. He resigns and is set down on the first available planet, which turns out to be under punishment for a rebellion against the Corporation. He barely survives, eventually escaping to join a small theater group and then a circus. The Corporation, meanwhile, decides that no entertainment that fails to extol its greatness can continue to exist, and sends troops to wipe them out.

Hamlet escapes again, and he decides to continue an outlaw artistic existence to defy the Corporation.

Marín himself has called the novel an “ambitious space opera,” which it is, offering careful characterization and thematic development. Hamlet matures as a man and an artist in a fully-imagined universe. Like most first novels, it’s not perfect, especially some of the wooden and long-winded dialogue, but the action scenes are riveting and the prose is polished, at times even soaring.

As critic Mariela González pointed out in her analysis, Lágrimas de Luz: Postmodernidad y estilo en la ciencia ficción española, the novel makes a clean break from pulp. It features protagonist who is hardly a hero, and its themes include the search for beauty, and the crisis and alienation of youth. Rather than save the universe, Hamlet can barely save himself, and the universe might not even merit saving: no lightweight escapism here.

The story also draws on Spain’s own medieval past and brings it into the future. The bards’ songs echo works like El Cid that had once been popularly sung throughout the land – a past oral culture updated for the novel’s present. The novel also responds in its own way to Robert Heinlein’s Space Troopers and openly draws on themes from Moby Dick and other classics.

The surprise of Lágrimas de luz didn’t usher in a sudden boom in Spanish science fiction. That waited until the 1990s with works by authors like Juan Miguel Aguilera, Elia Barceló, Javier Negrete, and Rodolfo Martínez, among many others, but the door had been opened. The genre continues to struggle, especially in the current economic crisis, and I have witnessed that too many Spanish science fiction fans do not yet believe that Spanish authors can write as well as English-language authors. (I try to convince them otherwise.) The road still heads uphill, but the problems are economic now, not artistic.

Rafael Marín, by the way, has continued to write and now has a long list of outstanding works to his name. Lágrimas de Luz is still in print after all these years and is available at Sportula, Amazon, Apple, Barnes & Noble, Casa del Libro, Ender, and Smashwords.