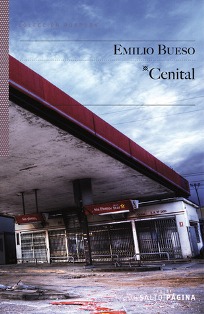 I bought this book after hearing it praised during the Celsius 232 festival for science fiction, fantasy, and horror in August in northern Spain. In fact, I bought one of the last remaining copies from a bookseller at the festival, and Emilio (we were all friends there, even if we had never met before) autographed it for me.

Cenital had already won the Celsius Award at the Semana Negra Festival. (The coincidence in the “celsius” names involves a long story that doesn’t matter here.) Bueso’s previous novel, Diástole [Diastole], a horror novel about a vampire with a different twist, also won the Celsius Award last year. Since then, Cenital has been nominated for a 2013 Ignotus Award, the Spanish equivalent to the Hugos, which will be awarded on December 14 at Hispacón 2013: Quartumcón in Quart de Poblet, near Valencia.

In a newspaper interview, Bueso said he wanted to write an unconventional dystopia, one that didn’t involve an autocratic, evil government. Instead, he was drawn to the consequences of energy use in modern society, particularly to the idea that petroleum won’t last forever. You could call the resulting novel science fiction, or you could call it an alternate history. You can’t call it pretty.

The novel opens in 2008 when a young man called Destral gets a job managing spy satellites for an espionage agency, which alerts him to the fact that petroleum production has reached its peak: oil companies, especially government-run ones, which are the lion’s share, have found it strategic to lie about how much reserves exist, while in fact the reserves are close to zero.

This inspires Destral to act. He starts to blog(!), ranting about the coming energy crisis and inviting people to join him in creating a self-sustaining hippy eco-village. In the next chapter, set in 2014, the little settlement is running successfully, almost idyllically. Or so it seems.

Short chapters interweave the past, the present, the blog, and citations from real life by Thomas Friedman, Mad Max, H.G. Wells, and Richard Heinberg, among others. In flashbacks, we’re introduced one by one to some of the members of the eco-village and learn how they came to be there.

For example, Teo had been a priest who lost his parish to the disaster when cheap oil ran out in 2012, which meant the end to trade and even farming, since farms needed fuel to run tractors and petroleum-based fertilizers, which were brought by ships and trucks that needed fuel to move. Cities starved, violence broke out, Teo lost his parish and nearly his life, and “when the last dog in the municipal dog pound had been devoured and every can of food had been emptied,” he remembered something he had once read on the Internet. He stumbled out of the city and its piles of corpses, and arrived at the eco-village, where he was accepted, and while he had no luck converting its members to Jesus, he was able to organize a school.

Except for Teo, though, the inhabitants seem to be good for little more than smoking weed, having sex, and growing dreadlocks. But crises loom: by mistake, there’s no seed for the wheat fields, and worse yet, they’re running low on condoms.

Perhaps because I’ve spent too much time on the Internet, Destral’s rants seemed a little tedious, although they were more compelling than the average angry blog. Still, they’re flashbacks, and the chapters that introduce characters are also flashbacks, so the actual time moving the plot forward is limited. The novel resembles a mosaic more than a conventional story-driven narrative, although each little part is told well enough to keep the book interesting. And, slowly, something ugly starts to loom in the distance.

Destral notices that the roads, which had been clogged to uselessness by abandoned cars, have been cleared to the point of being passable in one lane. Someone wants to go somewhere and has the sustained manpower to push aside all those hulks. The flashbacks also grow increasingly brutal, a hint of what’s to come. It’s no secret that the anarchy following the collapse of civilization has left most people dead and too many of the survivors reduced to savagery and cannibalism.

I had suspected from the beginning that the eco-village’s inhabitants would be put to a test. And they are. Bueso’s earlier works have been horror, and this book returns to horror at the end.

The odd structure works well enough, giving it an air a bit more like a documentary than a novel. At times the dialog sounds false, especially in the final conflict. But that final conflict makes all the parts in the book fall suddenly and satisfactorily into place. Cenital faces tough competition for the Ignotus, but it’s a worthy contender.