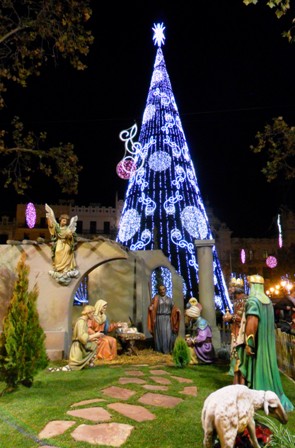 (In case you’re not on the Christmas card list for me and my husband Jerry, here's our Christmas newsletter.)

We traveled to the United States twice this year to spend time with family. First we celebrated Jerry's mother's 80th birthday in Milwaukee in June, and then Fourth of July at Sue's brother Lou's home in Houston. In November we crossed the Big Pond again to go to Houston for a Burke family Thanksgiving.

Jerry is still working for IBM and this year traveled to Finland, where he ate reindeer, which is why Santa's sleigh (and UPS) arrived a bit slower. He's still studying Portuguese and is reading a lot.

Sue is no longer teaching English to Spanish teenagers. She earned a Masters-level diploma in Spanish-to-English translation and is now working as a writer and translator. She has already been assigned a novel by a US publisher. In addition, she got her Spanish driver's license, which is a lot more difficult than getting a US license and took months of study.

We ended the year with a trip in December to Valencia for Spain's science fiction convention (and took the photo of the Christmas display in the City Hall Square). We’re spending quiet year-end holidays here in Madrid.