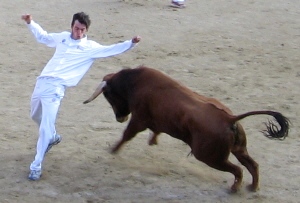 What’s the first thing that comes to mind when you think about Spain?

The Elcano Royal Institute, a Spanish think-tank, conducted a poll of people in ten strategically important countries around the world at the start of this year, asking that question. Most people – but not all of them – thought about bulls. (I took that photo at a running of the bulls in San Sebastian de los Reyes.) Or soccer (football). Hardly anyone thought about siestas, although they did years ago. Pretty many thought about the economic crisis.

But not every country thought alike, and that’s where things get interesting.

Most of Spain’s tourism comes from Britain, France, and Germany, so it’s not surprising that the top answer was “sun” for the British at 28.5%, the French at 26%, and the Germans at 21.8%. For them, Spain is a cheap beach vacation destination. Benidorm, for example, is a Mediterranean coast city of skyscraper hotels lining beaches that hosts five million tourists per year and is famous for attracting a certain class of British tourists.

European tourists tend to go to a beach and stay there, although their younger cohorts manage to wander off into bars and then wander out drunk, rowdy, and annoying.

In the United States, the responses were a little different: “bulls” at 13.5%, specific cities like Madrid or Barcelona at 10.3%, “a wonderful country” at 10%, gastronomy at 9.5%, and culture at 6.8%. While “wonderful country” is pretty generic and may be proof of the famous US failure at geography, “gastronomy” reflects a growing interest in tapas.

That mention of “culture” matters. Relatively few Americans come to Spain as tourists, but the tourism industry treasures them. Unlike the French, Americans go to restaurants and hotels rather than eating out of a cooler in their cars and sleeping at campgrounds. Americans also tend to go to cultural sites rather than beaches, perhaps because the United States has fine beaches of its own but no castles, cathedrals, or Prado Museum. This makes Americans relatively big spenders, and they spend money on the “right” things.

For Mexico and especially Morocco, their top concern reflected their relationship to Spain as a big trading partner. Economic crisis was the top response for Mexicans at 10.2% and Moroccans at 18%.

Bulls topped the thoughts of Brazilians at 28.3% and South Koreans at 37%.

Bulls, sunshine, soccer, and an economic crisis. No one asked the same question to Spaniards themselves, but having lived here for 15 years, I know that the economy is a big worry, soccer is a constant, beaches draw crowds in the summer, and bulls are both a minority interest and a national symbol.

“Stereotypes last longer than the reality that gave rise to them,” said the director of the poll. Nobody takes siestas in Spain anymore, and they haven’t for a long time. The rest of the world has finally stopped thinking about that, at least.