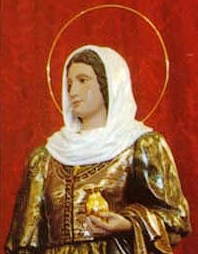 Today is the feast day for a Madrid saint, Santa María de la Cabeza – yes, that translates as Saint Mary of the Head. Why “head”? It’s a strange story.

María Toribia lived in Madrid about 900 years ago, and she was the wife of Isidro de Merlo y Quintana, a farm worker who is now the patron saint of Madrid. Both were very pious, and throughout their humble lives, they performed a variety of miracles. After their son Illán grew up (he’s also a saint), she became a hermit at a chapel dedicated to the Virgin Mary.

After she died, she was interred at the hermitage, but for some reason, her head was separated from her body and placed in a gilt reliquary. As such, many miracles were attributed to it, especially ending droughts and curing headaches. She became considered a saint locally well before she was beatified by Pope Innocent XII in 1697. A major street here in Madrid is named after her, Paseo de Santa María de la Cabeza.

As far as I know, no public festivities are planned for today, although the date will certainly be observed at the San Isidro Church, where her remains now rest.

I hope to celebrate by having a headache-free day.