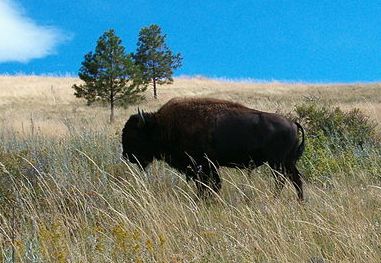 (A bison at the National Bison Range in Montana. Photo by Paul Frederickson.)

It’s a mutual love story that began during the Miocene epoch about 23 million years ago. This was the time when kelp forests appeared in oceans, birds and mammals were well established (including our ancestors, who were splitting from chimpanzees), and grass-grazer ecosystems took over large parts of the world.

Grass is like few other plants. Its stems grow underground. What we see as grass are merely the leaves. Buffalo can eat the leaves (or we can chop the leaves off with a lawn mower), and the grass can keep on growing.

As grasses evolved and expanded their territories, so did animals to eat them, as varied as deer, elk, elephants, wooly mammoths, sheep, horses, zebras, rabbits, cows, buffalo, and bison. (American bison are called “buffalo” because they were named by French fur trappers, who apparently weren’t taxonomy experts.) Large grazers were key to the spread of grasslands.

Here’s why: trees will take over any land they can, including prairies. As they grow, they block the sun, killing the grass. So for grass to flourish, trees must be eliminated. Grazers do this by eating seedlings as they munch the grass and by trampling the seedlings. They also eat other kinds of plants that grow with above-ground stems and would compete with the grass.

So buffalo need grasslands for grazing, and grasslands need buffalo to keep arboreal intruders from encroaching on their territory. America’s Great Plains and the American bison created and maintained each other.

If we look at it from the point of view of grasses, we can see that they get to reign supreme by putting up with the inconvenience of being grazed on from time to time. Grasslands cover almost a third of the planet’s land: they’ve found a winning strategy.

Bearing that in mind, I wrote a novel, Semiosis. Watch for more news closer to its publication date.

And in the meantime, remember that the ratio of flora to fauna on Earth is 100 to 1. Humans consider themselves the dominant species, but I think we should be more humble. There’s a lot going on, and we’re just one small player in a big, complicated game where we might not be much loved beyond our usefulness.