I’ve seen three Holy Grails – not that I was looking for them, but I got lucky anyway.

The Holy Grail, of course, is the cup from which Christ drank at the Last Supper and which was used to catch his blood as he hung on the Cross. In medieval times, stories about King Arthur and the Knights of the Round Table recounted quests for the Holy Grail, and eventually belief in its existence became widespread – including the assertion that drinking from the grail conveyed immortality. 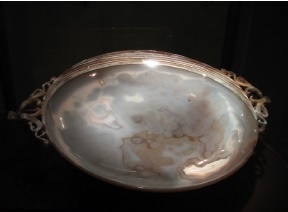 One magnificent grail is the agatschate or agate bowl on display in the Imperial Treasury at Hofburg Palace in Vienna, Austria. It measures 30 inches / 76 cm from handle to handle and was carved from a single block of agate. On the basis of beauty alone – still in perfect condition – it merits the status of treasure. Probably, it was carved for the court of the Byzantine Emperor Constantine in the early 4th century and came to western Europe when Constantinople fell in 1204.

If you look at the bowl in the right light, you can sometimes see the letters “XRISTO.” This natural result of the veins in the agate for a time was taken as proof that this was the Holy Grail.

But isn’t a “grail” a drinking vessel? No. The word originally meant a serving dish, bowl, or cup.

Is it worth seeing? The bowl is housed in the House of Habsburg Imperial Treasury, which contains room after room of splendid secular and ecclesiastical riches including the crown of the Holy Roman Emperor, made over a thousand years ago and still sparkling like new; important historic relics including wood from the True Cross; and the treasury of the Knights of the Golden Fleece. After my visit, I realized that never before and probably never again will I be surrounded by so much gold and so many diamonds, pearls, and enormous gemstones. Go – and be prepared to be dazzled.

Another candidate for Holy Grail is the Chalice of Doña Urraca made in the 11th century and on display at the Museum and Pantheon at San Isidoro Basilica in León, Spain. It is an agate chalice that was encrusted with gold and jewels on orders of Urraca of Zamora (1033 - 1101), daughter of King Ferdinand I the Great.

The princesses of the royal family were charged with the care, maintenance, and control of many of the churches and monasteries in the kingdom, and they often commissioned magnificent works to enrich and ennoble them. The cup and base of the chalice are made of agate pieces from Roman times, and Doña Urraca had them united and decorated.

No one seemed to think it was the Holy Grail until the appearance of a 2014 book, Los Reyes del Grial (The Royalty of the Grail) by Margarita Torres Sevilla and José Miguel Ortega del Río, which claimed it was “the only chalice that could be considered the chalice of Christ.”

This would have been news to Doña Urraca. No records from that time – and we have quite a few – show that anyone believed anything like that. In fact, she lived just before the tales of King Arthur and the Knights of the Round Table became popular, so the idea would never even have occurred to her. If it is the Holy Grail, it is so purely by accident.

Is it worth seeing? If you’re in León, by all means. Even better than the chalice and the many other church treasures in the museum is the Pantheon in the basilica’s crypt, which contains early 12th-century frescoes often called “the Sistine Chapel of Romanesque Art.” 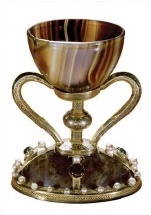 Finally, there’s the Holy Chalice at the Cathedral of Valencia. This is another agate cup, and is believed to have been made in the Middle East up to a century before Christ. It was later mounted in gold, silver, and gemstones.

Tradition says it was taken to Rome by Saint Peter, eventually came to Spain, and later was given to King Martin of Aragon in 1399. His successor gave it to the cathedral.

Is it real? The cathedral argues that such a cup would have been used for Sabbath and Passover suppers by Jewish families in the time of Christ. It has the status of holy relic. If Jesus didn’t use this cup, he may have used one much like it.

Is it worth seeing? Since 1916 it has been lovingly housed in a special chapel of the medieval cathedral, which has other beautiful chapels and a museum displaying many items of art and worship, and amid the rich architecture of the cathedral. Take a look at these photos. There’s lots to see and do in Valencia, and this is one of the city’s main historic sites.

I didn’t set out on a quest for holy grails. I love history and went looking for that – and I found plenty of it. The grails came as a side note, anecdotes, traveler’s tales about a thread in European history that unites artifacts with faith and legend. Every artifact tells a story, and every story is itself a treasure.