A lot of what I published last year were works I translated from Spanish, and if you’re thinking about award nominations, I’d be just as proud to see my translations win an award as if they were my own works. So here are translations with my fingerprints on them: 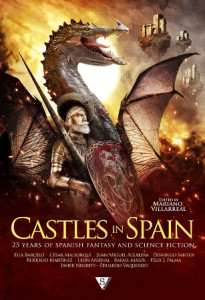 Castles in Spain
An anthology of the stories by Spain’s top authors that changed the direction of its speculative fiction. I helped with the crowdfunding campaign, coordinated the translation team, and translated the steampunk novelette by Eduardo Vaquerizo, “Victim and Executioner.” Available at Sportula and Amazon .

The Twilight of the Normidons, by Sergio Llanes
A novel set in an alternate Europe. A Rome-like empire teeters after three thousand years of domination by the Sforza dynasty as rebellions threaten its borders and treason weakens it from within. Published by Dokusou Ediciones and available at Amazon.

“To Sleep, Perhaps to Dream” by Emilio Bueso
A short story. A woman on a long walk home at night in North Korea meets her late husband. Published in the special Eurocon edition of SupersSonic magazine, available for free download here.

Spanish Women of Wonder
An anthology of eleven stories (seven are my translations) written in Spanish by women. With a foreword by Ann VanderMeer. Originally titled Alucinadas. Available from Palabaristas Publishing.

I published a little of my own fiction as well:

“The Perfect Place for Ghosts”
A short story set in Madrid, Spain. The city is full of chimaeras, ghosts, specters, shades, spirits, and other apparitions (this is allegedly true), and a neophyte ghost-hunter takes on his first case after a skyscraper burns down spectacularly (this happened for real, the Windsor Tower*). Published in SuperSonic magazine issue 5.

“They Sing in the Subways”
Another short story set in Madrid. When the lights go out, the subway becomes menacing. Published in Madness and Riddance: Madrid Writer's Club Anthology.

*Here’s a spectacular video of the Windsor Tower fire, but don’t listen to the sensationalist narration, which is riddled with inaccuracies, and as always do not under any circumstances read the comments, which will make you despair for humanity.
Collapse