We can hear a lot of more or less medieval stories these days (I’m looking at you, Game of Thrones) but here’s a real one. It comes from El Conde Lucanor, written in 1335 by don Juan Manuel, who was Prince of Villena and grandson of King Fernando III of Castile. It contains parables and tales to help the fictional Count Lucanor understand how to confront problems in his life.

This story, “What Happened Between a Deacon from Santiago and Don Yllan, the Grand Master of Toledo,” deals with people who ask for help and promise to reciprocate. I’ve translated it freely. 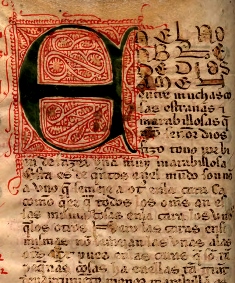 A deacon who lived in the city of Santiago de Compostela yearned to master the magical arts, so when he heard that don Yllan of Toledo knew more about them than any man alive, off he went. As soon as he arrived, he made his way to don Yllan’s house and found him reading.

Don Yllan promptly rose and welcomed him, so apparently pleased to see him that he didn’t even want to hear why he’d come until they’d eaten. In the meantime, he offered the deacon a fine room and everything he might need.

After dinner, they spoke privately, and the deacon explained what he sought, urging don Yllan to share his wisdom, promising to be an eager learner. The master magician answered that the deacon was a man of high estate who’d go far – and men who achieve their goals soon forget what other men have done for them. Once the deacon had learned what he wanted, would he keep his word and help don Yllan in return? The deacon promised he would, no matter what good fortune came to him.

With that, they began the lessons. As the afternoon wore on and night came, don Yllan told the deacon that what he wanted to learn could only be taught in a much more private place, which he was about to show him. He took him by the hand and led him to a chamber. Then don Yllan left to call a young serving woman and told her to prepare some partridges for supper – but not to begin roasting them until he gave the order.

He returned to the deacon, and they climbed down a stone staircase for so long that it seemed as if the River Tajo had to be passing over their heads. At the bottom of the staircase lay a hallway leading to a beautiful room with the books he’d need to study. They sat down and were deciding where to begin when two footmen came through the door with a letter for the deacon from his uncle, the archbishop, that said he was very ill and if his nephew wished to see him alive, he should come right away. The deacon thought hard, weighing his uncle’s illness and his unwillingness to cease studying when he’d just begun. Finally he decided not to quit so soon, wrote a reply, and sent it to the archbishop.

Three or four days later, footmen came with more letters for the deacon telling him that his uncle had passed on, and that the clergy in Santiago were selecting a new archbishop. By the mercy of God they might pick him, but he shouldn’t hurry back. It was better for his chances to be elsewhere during the vote.

After another seven or eight days, two well-dressed squires came, kissed his hand, and showed him letters saying he’d been elected archbishop. When don Yllan heard this, he told his student he should thank God for this good news – and since God had blessed him with so much, would he be so kind as to grant his son the now-empty post of deacon? The new archbishop instead wanted to give it to his brother, promising to repay don Yllan very well later, and asked him to come with him to Santiago and bring his son. Don Yllan agreed.

They were welcomed in Santiago and treated well, and after they’d been living there for a while, one day messengers from the Pope came to the archbishop telling him he’d been named bishop of Tolosa, and he could give the post in Santiago to whomever he wished. When don Yllan heard this, he reminded him bluntly of what he’d promised and asked him to give the post to his son. The archbishop wanted to give it to his paternal uncle. Don Yllan said he was being done a great wrong, but he’d consent with the understanding that it would be made up later on. The archbishop reassured him, asking him to come to Tolosa and bring his son.

The counts and all the other noblemen of Tolosa welcomed them. After they’d been living there for two years, messengers from the Pope came with letters saying the bishop had been made a cardinal, and he could give the bishopric of Tolosa to whomever he pleased. Don Yllan came to him and told him that he’d failed to keep his word so many times that he had no excuse anymore and had to give the post to his son. The cardinal instead wanted to give it to his maternal uncle, an elderly nobleman. But, he said, don Yllan should come with him to the Holy See, and now that he was a cardinal, he’d surely be able to find some way to make it up to him. Don Yllan complained a lot, but he agreed and went with him to Rome.

There, cardinals and everyone else at the Holy See welcomed them, and they lived in Rome for a long time. Every day, Don Yllan asked the cardinal to give his son a post, and he kept getting excuses.

When the Pope passed away, the cardinal from Santiago was elected to replace him. Then Don Yllan went to him to say he could no longer offer any excuse to fail to keep his promise. The new Pope told him not to be in such a hurry, that the time would come when he could do something proper for his son. Don Yllan began to complain, reminding him of all the promises he’d never fulfilled and how he’d worried from the beginning that he’d never keep his word. He should no longer keep him waiting. The Pope shouted back that if he asked for anything ever again he’d throw him in prison because he was a heretic and a wizard, and he should have known he’d never get anything more than what he’d had back in Toledo, where his only livelihood was by means of black magic.

When Don Yllan saw how little thanks he was going to get for what he’d done, he prepared to depart, and the Pope wouldn’t even give him food for the trip home. Then Don Yllan told him that if he wasn’t going to offer him a meal, he’d have to rely on the partridges he’d ordered to be roasted that night, and he called his wife and told her to begin preparing them.

At that, the Pope found himself in Toledo, still the deacon of Santiago, just as he’d been when he’d arrived. He felt too ashamed even to speak. Don Yllan told him to go with good fortune, and since he’d proven himself so thoroughly, it wouldn’t be right to offer him any of the partridges.