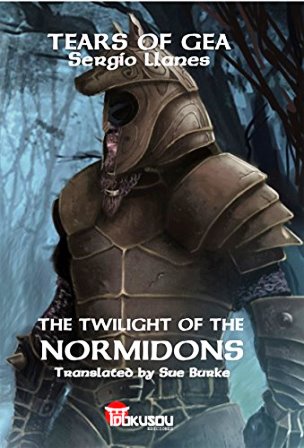 During his childhood in Murcia, Spain, Sergio Llanes spent more time with his head in the clouds than in the real world, he says. Then a teacher recommended The Hobbit by J.R.R. Tolkein, The Neverending Story by Michael Ende, and Treasure Island by Robert Louis Stevenson.

“That was the beginning of my romance with reading, but soon I realized it wasn’t enough, and I began to write my own stories. I was thirteen years old.”

Eventually, with the support of his friends, wife, and editors, he published books that told the story of the world he’d imagined, an alternate history of sorts where an empire much like Rome has never fallen, but now it’s rotting from the inside. The Sforza dynasty, which has held the throne for millennia, is betrayed as greater powers vie for control, and the Emperor’s own Normidon Guard faces destruction.

I’ve translated the first book in the saga, The Twilight of the Normidons, a tale of action and adventure with interrelated characters from the breadth of the Empire and beyond. I’m honored and delighted to bring Sergio to English-language readers:

You’ve written a long saga full of intertwining stories. What specific tricks do you use to conceive and write something so complex?

Sergio Llanes: We might say I have a natural advantage. I spend most of my time in the world I’ve created for the saga of The Tears of Gea. From time to time my mind comes back to reality, although I really enjoy roaming through the lands of the Sforza and chatting with my characters even when I’m awake. (Smiles.) It’s easier to develop my novel’s plots knowing every corner of that world inside and out along with the four thousand years of history that precede the saga, and the mythologies of Auria and its neighboring realms.

Do you use a spreadsheet like J.K. Rowling, or an outline or notebook?

SLl: While its true I’ve made outlines and summaries about everything surrounding my world and the plots I develop in the saga, I almost never use them. These notes are the written reflection of everything in my mind.

Even more important both for writers and readers, how do you maintain the tension and excitement in a book so that it invites readers to keep turning pages?

SLl: The key is to know how to get inside the skins of the characters. It might seem crazy, but often I close my eyes and imagine the scene I’m going to narrate through the eyes of the protagonists. If I’m on board a ship in the middle of a storm, I feel the onslaught of the wind and the rain drumming on the deck, see the crew rushing from port to stern to secure the rigging, hear the voice of the captain shouting orders.…

If I’m in the middle of a battle, I imagine a soldier’s viewpoint when he dodges a cavalry charge or raises his shield to protect hismelf from a rain of arrows, or the sound of the dying cries of the victims of a raid..…

In a scene in a tavern in a port town, I can note the tang of homemade brew, the disagreeable odor of the tavern keeper’s sweat, or the lascivious glance from one of the barmaids as she leans over the bar provocatively, and the laughter and joking of the merchants at the next table.… Definitely, each and every detail within the scene from the perspective of the characters.

As to whether I’ve created one of those kinds of works that hooks the readers and keeps them reading, I have a very cinematographic vision of everything, which I bring to life in words, but I’m not the one to say if it works. It’s true, though, that the critiques have been really good, and my readers tell me it’s addictive reading. One of the things that’s thrilled me the most since I began writing have been the comments by parents thanking me because their children have finally become enthusiastic readers due to my books. In any case, I invite all enthusiastic readers to come inside the world of The Tears of Gea.

Finally, can you offer any advice to other authors?

SLl: The first piece of advice that I always give, besides writing, is reading a lot of other authors from a variety of genres. Reading opens up your mind and enriches you so much that it makes your own writing more agile and appealing.

The second piece of advice would be to use all the tools available to create the right atmosphere and become immersed in the scene: music, acting out the characters, choosing the right environment, etc.…

Third and most important is not to view writing as an obligation but as essential pleasure. Every facet of creativity loses its power when it becomes an imposition. This doesn’t mean that writers shouldn’t become accustomed to creativity as a daily habit, which I recommend, but that they shouldn’t feel upset if they hit a spell when things don’t go as well as they’d hoped. They should never stop believing in themselves. They should never stop dreaming.
………