I’ve read the new Terms of Service for LiveJournal, and they aren’t encouraging. They will also never affect me directly in all likelihood. Three thousand user accesses in 24 hours, which is what it takes to trip the most odious provisions? I’m not that popular. They also may not apply to someone with a paid account, which I have.

In any case, I doubt the rules will be enforced on anyone in the United States. Russians restricting the free speech of Americans in America? Not a good way to win friends and influence people. (Facebook is still diputed territory, though.)

Still, LiveJournal is now under Russian law, which bans “gay propaganda” and political solicitation, among other things. (Such as depicting Putin as a gay clown.*) Again, this has more to do with Russian politics than anything else. At the same time, American politics don’t fill me with confidence right now, and American-Russian relations could move in any direction without notice due to as little as a witness testifying at a US Congressional committee.

For that reason, I’ve created a Dreamwidth account: https://mount-oregano.dreamwidth.org/ I haven’t done much there yet. It takes time to set up an account, and I have paying work to do and fiction to write. Still, I’ll be cross-posting. I want to be prepared for whatever might happen. I like LiveJournal and don’t want to give it up, so I’ll be here as long as I can.

But we live in troubled times. 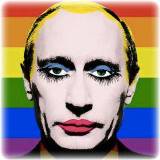