A Ming Dynasty vase and an ancient Greek urn share beauty but not aesthetics. The artisans of the different styles might have appreciated each other’s work if they had known about it – and yet they might have stuck to their own ways, perhaps because they saw no reason to change or because they lacked the material and equipment to produce anything else. 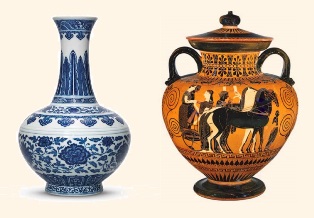 Likewise, languages have different rules for beautiful prose based both on cultural inheritance and on the possibilities and limits of each language within its grammar and vocabulary. I translate Spanish to English, and I often face the delightful task of transforming beautiful Spanish prose into beautiful English prose. To do that, I’ve had to learn to appreciate the standards of beauty for each language, which share little in common due to different historical trajectories.

Spanish emerged from a local dialect of Latin. King Alfonso X the Wise, who reigned from 1252 to 1284, made Spanish (Castilian, to be precise) the official language of his realm. To cement that decree, he assembled scholars in Toledo to translate literature from other languages into Spanish and to create new books, and he himself wrote a few. He knew that a language must have literature.

Fine writing style in Spanish still echoes its scholarly roots: a bit formal and elaborated. Above all, good style rejects repetition. Vocabulary and syntax should be richly varied. Spanish grammar permits long, ornate sentences, because the verbs are fully conjugated and the nouns and adjectives are gendered, so subordinate clauses can easily be looped together like tatted lace.

English has suffered a more checkered history. After the Norman invasion in 1066, Norman French became the dominant language in Britain, and English was shattered into regional dialects. As modern English eventually began to emerge, it was shaped by two literary landmarks: Shakespeare and the King James Bible.

The Bard of Avon began writing plays in about 1592, adding lively new words and expressions we still use today. We all speak “the language of Shakespeare” – which is how Spaniards often refer to English (to avoid repeating the word English).

But even more importantly for the development of English, the King James Bible was published in 1611, and its constant use as the single major work of literature readily available to the ordinary person made it the standard and model for their language. Its translators had produced direct, unornamented prose meant for ordinary people, not scholars, and they stuck close to the syntax of the original languages, notably Hebrew in the Old Testament.

Many of those Bible verses were poetry, and Hebrew poetry does not rhyme; instead, it uses parallel, balanced structures of phrases or ideas, and repetition of words or rhythms. The second half of a parallel may paraphrase the first half, it may give a consequence, it may contradict the first half, or it may add stronger and stronger clauses or sentences that lead to an apex. Rhythm can make the prose musical.

Because of that, repetition strikes the English-language ear as beautiful. The two most famous speeches of the 20th century, “I Have a Dream” by Martin Luther King Jr., and “Blood, Sweat, and Tears” by Winston Churchill, demonstrate the power and melody of repetition.

With that in mind, I translated the novel Prodigios (Prodigies) by Angélica Gorodischer for Small Beer Press. Hers was a dense, very Spanish prose, without a doubt beautiful. I had to bring it into English. Here is an example from Chapter 15:

“...in some houses the curtains were chastely closed because this sun, excessive, out of place and propriety, might burst on parquet floors and tapestries, might fade the fabric, and worse, might strike the skin on forearms and behind earlobes of protected and obedient girls, inciting their thoughts, girls who also transformed in that season like the sun...”

With a little repetition, I sought to set new words to the original tune and make them sing as sweetly. The changes were slight, almost automatic, guided by some knowledge of how to make the transformation, and with it, I hope I did the original words justice.

There were alternatives, of course. One problem – or possibility, depending on how you look at it – involves the translation of the word fuera, which is the past tense third person singular subjunctive form of “to be.” Spanish subjunctive can be translated in many ways, often with difficulty because the use of subjunctive in English is much more limited than in Spanish. There are various ways to render it, and each requires other changes in the syntax. One possible way, and a more literal translation, is:

“…in some houses the chaste curtains were closed to prevent this sun, excessive and out of place and propriety, as it was bursting on parquets and tapestries, from fading fabric and worse, inciting thoughts as it was striking skin on the forearms and behind the earlobes of the protected and obedient girls who also changed in this season like the sun.”

Although this is perfectly acceptable, to my ear it sounds ordinary, unlike the original prose, which sounds extraordinary. I hear too many present participles, and while repetition of grammatical forms is good, these do not all fulfill the exact same grammatical role: they’re not parallel.

Instead, in my final version, I tried to find a way to unite as many verbs as I could under the modal might. It expresses weak probability, which at times can convey the sense imparted by Spanish subjunctive. I got might burst, might fade, might strike, and deliberately chose to repeat might to make sure the reader understood the relationship between the verbs.

The excerpt also focuses on the girls of the households, who must be kept chaste and unchanged. So rather than say who toward the end of the sentence, I found a way to repeat girls and thus place a bit more emphasis on them.

The rest, with a little tweaking, fell into place, and to me it sounds better – although matters of style are always open to debate, which is good. Dialogue strengthens literature, and literature strengthens language.

Also posted at The Tiff, Asymptote magazine’s blog, and at my professinal website.