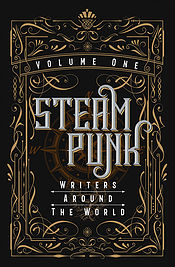 You can read my translation of “The Story of Your Heart,” by Josué Ramos, in Steampunk Writers Around the World, Volume I, by Luna Publishing.

In Josué’s short story, people can get transplants to fix or improve themselves, or they can be donors – by force or by choice.

The anthology is bilingual, in English and Spanish. Its eleven stories came out of a project that encouraged writers to engage with each other across borders and to express how steampunk, though global, is born from the unique culture of its setting.

It was a pleasure to translate Josué’s story from Spain. I hope you’ll enjoy it. Other stories come from places as varied as Cuba, Brazil, Germany, Mexico, Hawaii, Africa, and India.

You can also read four poems I translated, with Christian Law, by Vicente Núñez, in The Northwest Review of Books Issue I: Literature in Translation. Núñez is one of the most daring and important poets of Andalusia, Spain, in the second half of the 20th century. We translated the poems as part of a project with the Vicente Núñez Foundation.

The four poems are “Books,” “Hymn I,” “Hymn III,” and one of his most famous love poems (and my favorite), “Twilight in Poley.” If evening has not touched the divine grace / of your dark eyes gazing at the fading / yielding light....

More Núñez, from the poem “Books”: On the soulless scrolls of questionable publishers / I poured out all the yearnings of an unmeasured passion.... From “Hymn to Trees III”: If we are condemned to burn / it will be by divine eternal lightning.