In 2005, I was living in Madrid, Spain. Here’s my blog post from that year’s eclipse. The map below from the Planetarium of Pamplona, Spain, shows Universal Times, and the Madrid peak time was 10:58 a.m. Luckily, I still have my Eclipse Shades to witness next week’s eclipse here in Chicago. Many suppliers are sold out already. 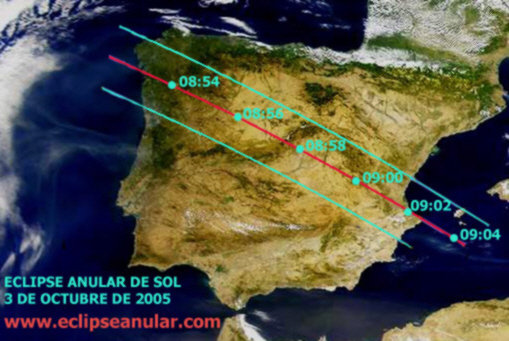 This morning, October 3, was cool and cloudless. My husband and I were sitting on the grass next to some rose bushes at the esplanade of Madrid's Planetarium. More than 2,000 people had come to witness the first annular eclipse of the Sun visible in Spain since April 1, 1764. It was about 10:30 a.m., still 25 minutes away from the big moment, but the Sun already had become a remarkable crescent.

One of the young women sitting behind us looked up. “¡Ay! ¡Qué chulo!” she said to her friend: Wow! It's so neat!

An LED screen in front of the Planetarium offered a live view of the Sun, or from time to time, explanatory videos. The orbit of the Moon placed it a bit far away from the Earth at that moment, so it wouldn’t cover all of the Sun as it does during a total eclipse. People on the ground in a narrow band from Spain to Somalia would see it cover 90% the Sun and create a ring of light in the sky.

Of course, no one should look at the Sun directly, so the Planetarium gave away 1,600 Eclipse Shades™, cardboard glasses with plastic lenses so dark nothing dimmer than the Sun could be seen through them. Someone had put a pair on the statue of the late, beloved Madrid Mayor Enrique Tierno Galván that presides over the esplanade, and groups of friends photographed each other standing beside it, everyone in their Shades.

Other people held the glasses as an improvised filter over the camera lens of their mobile telephones. More professionally minded photographers, there in abundance, used real filters. School groups, retirees, but most of all young people had come out: unemployment is high among young adults in Spain, so they had the time and the proper finances to appreciate a free show.

Refreshments, so to speak, were provided by Wrigley's, which introduced a new brand of chewing gum that day to Spain: Trex Eclipse. Representatives handed out free packs. The advertising campaign called the gum “intensely refreshing.” It tasted very minty.

Over loudspeakers, an astronomer described other eclipses as the heavens continued to move above us. By 10:45 the light was noticeably dimmer, like a cloudy day, and, next to us, the light diffracting through the tiny spaces between the leaves of the rose bushes dappled tiny crescent shapes on the ground.

A Telemadrid TV station helicopter began to circle the Planetarium, photographing a sea of people staring through cardboard glasses at the sky. Some people waved.

The moment approached. The crescent shrank into a tiny sliver.

The Planetarium had arranged for a violinist, Ara Malikian, to play his composition, Moon Shadow, during the peak minutes of the eclipse. He was introduced to applause. The work made use of the ability of a violinist to play two strings at once, the two notes representing the two heavenly bodies as they reached harmony — though he was hard to hear over the TV helicopter.

The Moon kept moving, and, finally, to more applause and shouts of “¡Vamos!” All right!, it made a ring out of the Sun.

For 4 minutes and 11 seconds, a beautiful halo of light floated overhead, too brilliant to see without shades, wonderful but weird. The shadows under the rose bushes became rings. The light was dimmer, and shadows sparkled with a new geometry. People looked up and around with delight.

Then, the ring thinned at the bottom, and there was a flash of a Baily's bead, a pearl of light that marked the rays of the Sun passing through a valley on the edge of the surface of the Moon. The Sun became a crescent again, to more applause.

The violinist explored the slow separation of the two spheres, ending with two sustained, simultaneous notes, to yet more applause. The crescent gradually grew, and eventually people began to drift off to the street, pausing for one last observation of the Sun through their souvenir glasses before they entered the subway and returned to their normal Monday routine.

A call to action in the wake of Charlottesville to re-enactors, LARPers, and all who enjoy the Middle Ages casually. Part XXIX in our ongoing series on�Race, Racism and the Middle Ages,�by Paul B. Sturtevant.

FACT CHECK: General Pershing on How to Stop Islamic Terrorists

Gen. John J. Pershing did not effectively discourage Muslim terrorists in the Philippines by killing them burying and their bodies along with those of pigs.