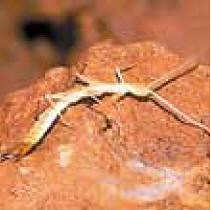 You can find Gollum deep in caves in eastern Spain, munching on mites and beetles.

A few weeks ago, a team of five scientists working with the Valencia Natural History Museum discovered a new cave animal, one of the biggest known predators in subterranean Europe, though it seems that "big" is a relative term.

The fearsome beast is a nearly transparent insect almost one inch/two centimeters long, dubbed Gollumjapyx smeagol. The discoverers named it in honor of a major character in the The Lord of the Rings by J.R.R. Tolkien, the Hobbit Smeagol. When he lost the ring, he became a nasty subterranean creature named Gollum.

This japygid dipluran (that is, an eyeless predatory six-legged arthropod that usually lives under stones) is both a new species and a new genus. The discoverers' excitement shines through their description in Zootaxa magazine:

"The new species is highly adapted to hypogean life with very obvious troglobiomorphic features: unpigmented cuticle, an extraordinary lengthening of thorax and appendixes, multiplication of antennomeres and supernumerary placoid sensilla, not just in the apical antennomere but also in the preceding antennomeres."

You can see much of that clearly in the photo.

"These traits make it the most exceptional of all the hypogean Japygidae known to date, with troglobiomorphic characteristics more accentuated than in other hypogean taxa known in the rest of the world."

That's something to get excited about.

"The new species has been located inside six average-sized underground caves, generally in the deepest areas, and may be one of the major hypogean predators in the Iberian Peninsula, with a diet that ranges from Acari to Anillini carabids. Its distribution along the limestone regions of the coastal ranges in the east of the Peninsula coincides with that of paleo-endemic troglobites. Therefore, it is possible to infer a remote origin for this species, as suggested by its high level of specialization in the subterranean ecosystems."

In other words, it's been down there for a long time. Since Middle Earth, perhaps.