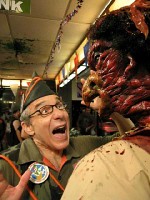 This is an early warning to my friend

birdhousefrog, who communes with chickens, in case she doesn't already know about the soon-to-be-released movie Poultrygeist: Night of the Chicken Dead."

This is the movie synopsis direct from its website:

When well-meaning but somewhat dim Arbie (Jason Yachanin) returns to the spot of his first (and only) romantic encounter with his high school sweetheart – the not-so-romantic Ancient Tromahawk Tribe Indian Burial Ground – he is shocked to discover two horrible realities:

Not only has the graveyard been bulldozed to make room for the newest fast-food “American Chicken Bunker” chain restaurant, but after only one semester at college, his girlfriend Wendy (Kate Graham) has been transformed into a left-wing, lipstick-lesbian liberal, and spends her free time protesting the corporate takeover of America.

Reeling from heartbreak and a brutal beating from Micki (Allyson Sereboff), Wendy’s new activist girlfriend, Arbie channels his spite into applying for a job at the very restaurant they are protesting against.

Much more, perhaps far too much, is available at:
http://www.poultrygeistmovie.com/
Subscribe