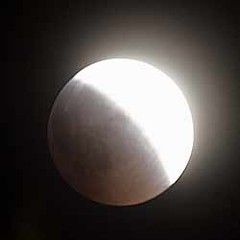 When the final crescent of sunlight slid away, the Moon turned a dim, reddish-brown and suddenly looked more spherical. The usual silvery glare, we realized, obscures its contour.

Last night, here in Madrid, Spain, the visible eclipse started at 22:30 local time, when the edge of the Moon touched the edge of the shadow of the Earth. By 23:43, it had slid fully within the shadow, lit only by the sunlight lensed and filtered by the Earth's atmosphere. At 00:57, it began to emerge, and at 2:11, the Moon looked normal again.

The weather remained unusually warm for this time of year, still about 10C/50F at midnight, when my husband and I were on a hill in a park in our neighborhood, staring up at the sky.

People had paused to watch everywhere. Encouraged by the warm temperatures and Madrid's non-stop nightlife (no self-respecting adult goes to bed before midnight even on weekdays), they were on "la marcha": they had marched out of their homes to go out and have fun, and a free show always attracts a crowd. One neighbor was hosting a moon-watching party, and a half-dozen young men lounged on the balcony, alternating their boisterous attention between the Moon and some pretty young women down in the street leaning against a wall, talking on their cellphones, eyes on the skies, coolly ignoring them.

The next total lunar eclipse visible in Spain will be in 2029.

Photos from around the world here: